New education minister Caroline Cochrane, in one of her first public engagements in the role, praised those receiving awards and urged them: “I’m old enough and educated enough to know I can’t do this alone. I need you all as partners.”

On this page, find details of everyone who received an award, photos, and tributes for teachers picking up significant long-service awards. 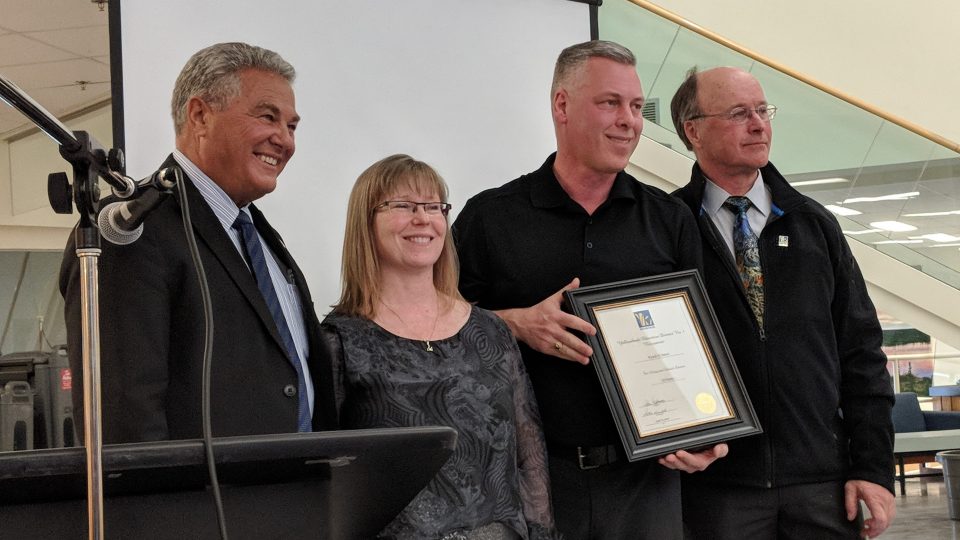 What do Elvis, duct tape, Darth Vader and Superman onesies have in common? Randy. Rocking out to 70s tunes and good old-fashioned country and western, Randy can be found doing what he loves best in the gym. At least once a week he tells us how lucky he is to have this job.

Randy came north in 1995 and started his career in Behchoko. After three years, he made his way to Yellowknife, where he taught grade 7 at Mildred Hall.

Now going on to his eighth year at NJ, Randy keeps himself plenty busy. He enjoys playing hockey and volunteers a lot of his time to coach and mentor at all levels of the game. His midget hockey team recently won a gold ulu for Team NT at the Arctic Winter Games, and he will be attending the 2019 Canada Winter Games as assistant head coach.

His innate ability to connect and build relationships with kids, and colleagues, makes working with him easy. 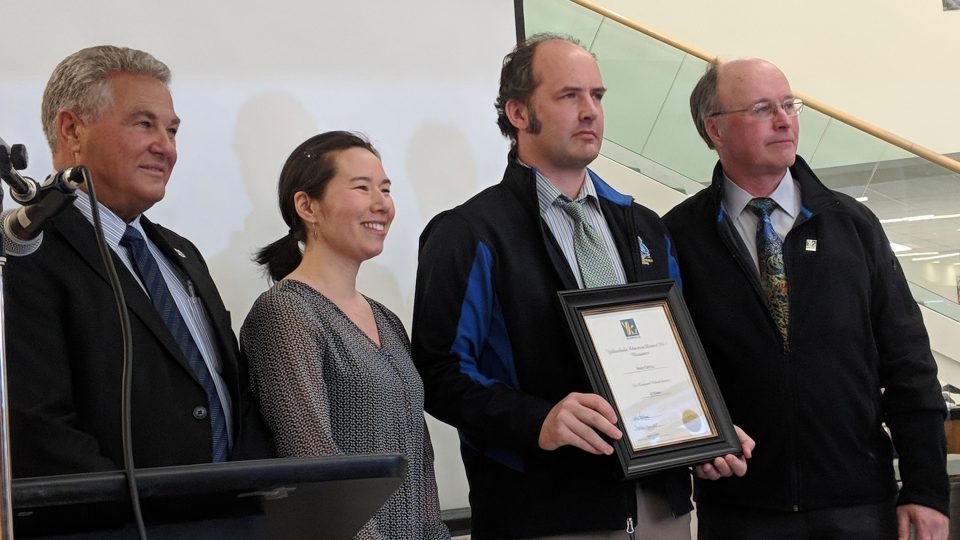 I’ve worked with Peter in the English department at SJF for about 10 years now. One advantage of being friends with Peter is I get to do favours for him. I’ve had to figure out what I say yes to and what I say no to. One time he suggested I drive his truck on the winter road – that was a no.

Peter is an excellent teacher from whom I’ve learned much. Most importantly, he knows how to get kids to do their best learning. The most interesting part of being in his class is being able to overhear what students have to say about them. This year I was privy to a couple of remarks that I think speak volumes. The first was ‘I don’t think I’ve learned as much from anyone as I have from Mr Curran,’ and the second was ‘I don’t think Mr Curran has ever been mad at me. He has just given me that disappointed look.’

He raises capable young adults who actually want to be better, and I don’t think we can hope for much more in this profession. 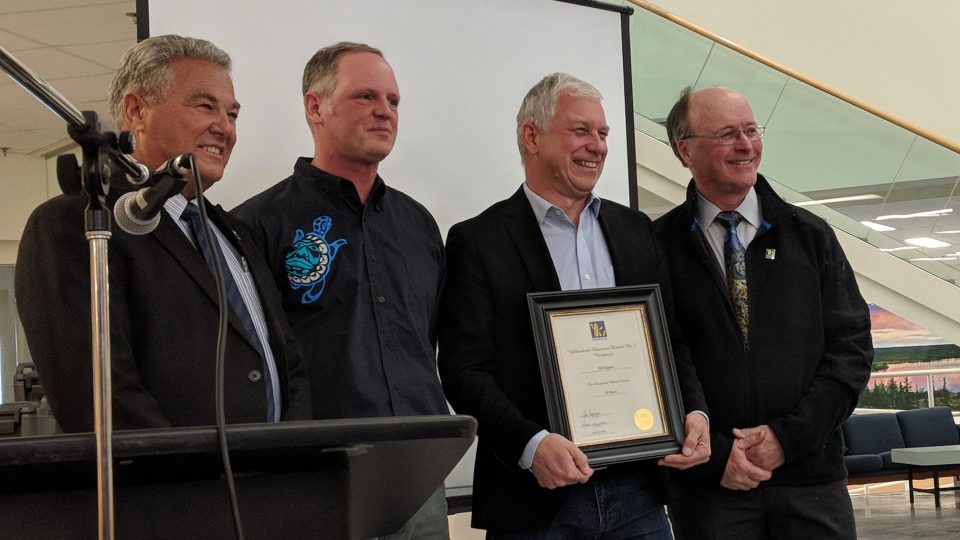 I’ve worked with Ed for 20 years. When I was asked to speak about Ed I thought I had tons of stories, but when I thought about it, most of them aren’t really appropriate.

As head of the science department, he was the only male teacher, and I thought that would do him in for sure. A short time later, the department was running like clockwork. The teachers even had pink tees made up reading ‘Ed’s Angels’ on the front.

He wasn’t political or power-hungry but he managed to run an amazing school. He always had time for conversations or staff with students. Sometimes I’d find him in his office late at night, strumming a guitar he had made out of a cigarette box.

Ed and I were sent to a school board meeting at a fancy resort outside of Victoria. Ed said we’re only going for a week, so let’s just take all our stuff as carry-on. Ed said the plane was continuing to Victoria so leave your stuff on the plane so let’s go for coffee. We’re drinking our coffee and we see our plane driving down the runway. Air Canada said no, that one’s going to Vancouver. A little later that day, we show up in Victoria at this fancy school board meeting with no notes, no laptop, no clothes, no toothbrush. On the third day, Ed has to make a speech. He stands up, wearing a lumberman’s jacket he’s been wearing for three days, walks to the front, and gives an amazing speech. 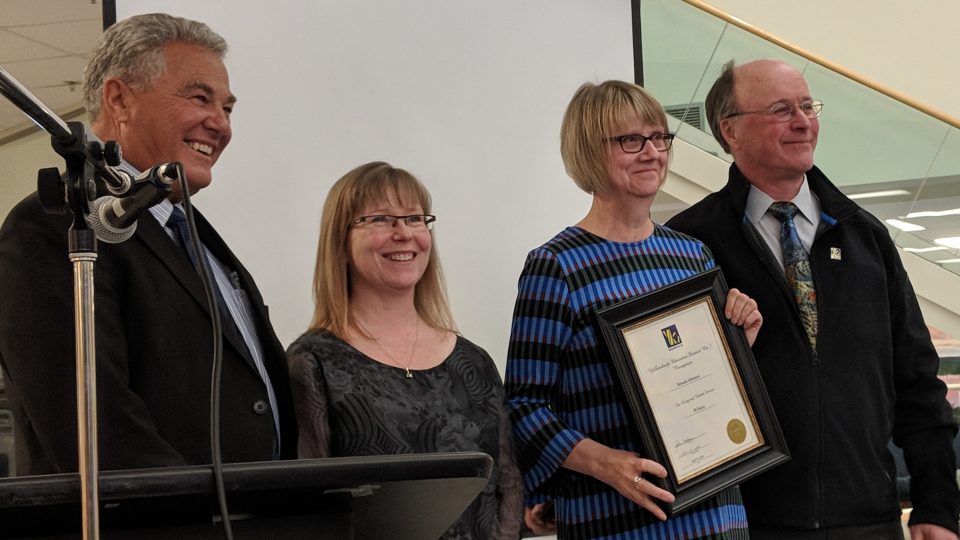 I’m quite honoured to speak on Brenda’s behalf. If you Google ‘quiet leadership’ you get 8.16 million hits. I found a way to capture what comes to mind when I think of Brenda, and it’s a quote from Albert Schweitzer: ‘Of all the will toward the ideal in mankind only a small part can manifest itself in public action. All the rest of this force must be content with small and obscure deeds. The sum of these, however, is a thousand times stronger than the acts of those who receive wide public recognition. The latter, compared to the former, are like the foam on the waves of a deep ocean.’

These words describe Brenda’s ongoing commitment to excellence in teaching, learning, and leadership. She has taught K-8 as a program support teacher and now curriculum coordinator. She is well known and respected as a quiet leader in our district.

Brenda has acted as a mentor, led countless professional development initiatives, and given up many a weekend to support her colleagues.

Although she is not fond of recognition, her consistent and often unknown deeds have contributed greatly to this district. 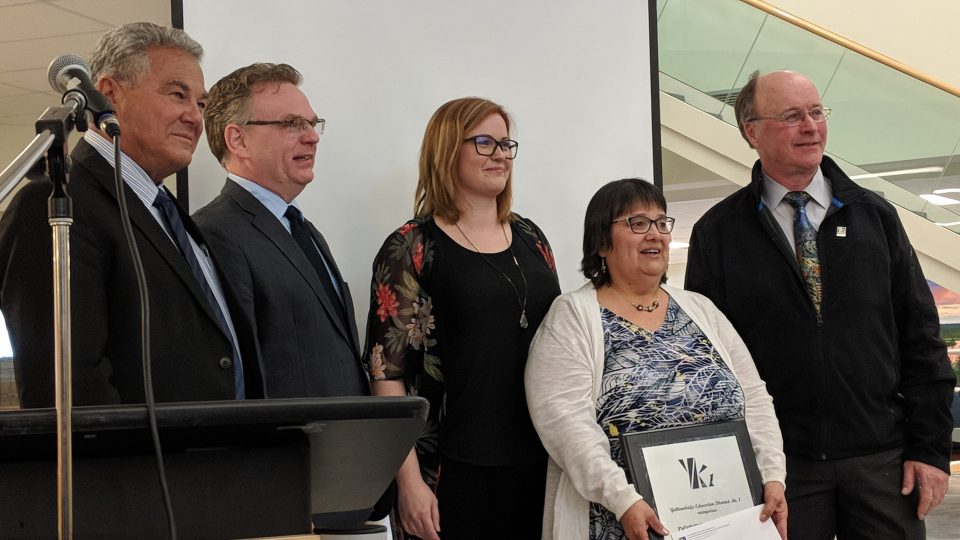 Doreen, where do we start? You had an amazing career and we’ve learned so much by working with you. I’ve known Doreen for 30 years.

Doreen has an amazing capacity. I’ve always been in awe when I watch the way she works with the students, parents, and staff. Her connections with this community and the others are amazing. Doreen knows everybody.

She has always respected the people she worked with, the kids, the parents, and the places they come from. One of her strengths is how she is so grounded. She has always put everyone before herself, she is hard worker, and she is always there. She’s got one of the most amazing and big hearts I’ve ever seen. She sees the best in everyone and is very patient.

You can always hear her saying, as she leaves with her students, some wisdom – and it’s always what are you going to do next? Doreen makes students feel like they matter, they have a place, and a role in the future.

She helped institute Yellowknife’s Aboriginal graduation ceremony. That is an incredible legacy. Doreen, we’re going to miss you. 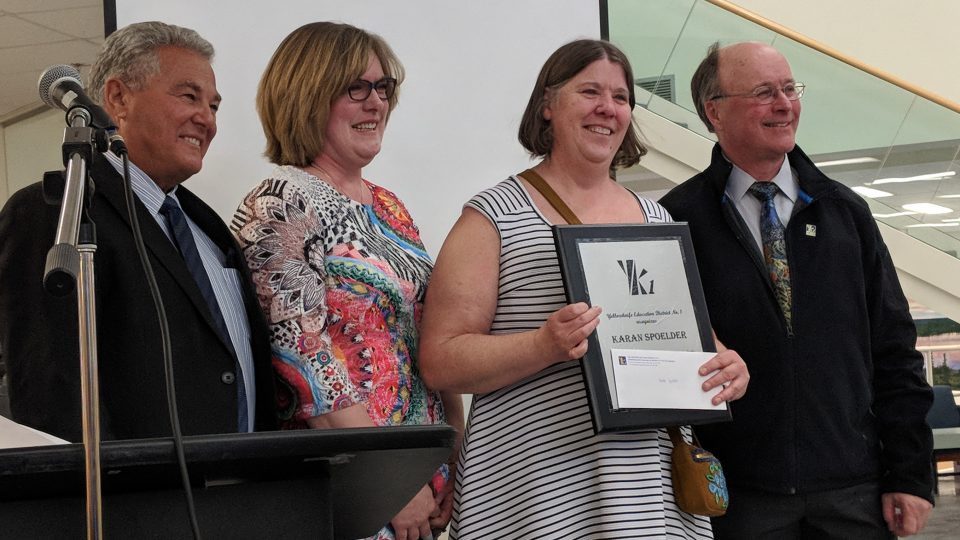 At first I was thinking, how many years has Karan been teaching? Then it dawned on me, I’m not here to talk to you about her years of service but wish her well in her retirement. Retirement? That word and Karan do not go together in the same sentence. It seems surreal.

She will have wide-open dates to garden, snorkel, camp, and explore.

She started in 2001, teaching at Range Lake, William McDonald and Mildred Hall. Karan is an innovator, a friend, a gardener, a caregiver. Karan’s love of teaching was evident daily: her sensitivity for those who needed her help and her ability to pull the best out of each student were remarkable. She set the bar high, knowing each student could and would reach that standard.

It was not uncommon to see Karen imitating a character or dancing with her kids. They were her extended family and she was the mother hen. She never faltered. She was their constant. Karen’s road through this profession has not always been easy an met the monster of MS head-on with her daughter. Things that would get to some of us caused Karen to work harder.

She will head out the door knowing she gave everything she had to this profession and her students, and their lives are better for having her be a part of them. 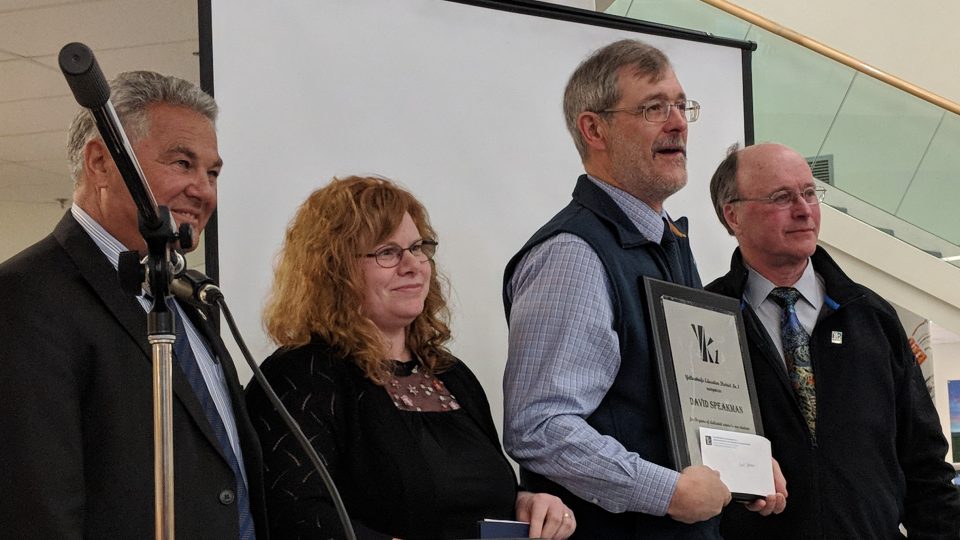 David began his teaching career in Deline in 1987, working for Aurora College until 1993. After 2000, he came to Yellowknife and spent about two years at Aurora College before working for seven years at Range Lake. He has been at Mildred Hall ever since.

He spent about 30 years teaching children and working with adults so that they, too, could become teachers.

David is an old dog. That doesn’t sound very flattering, but give me a minute. Old dogs are usually gentle, calm, reliable, laidback, and excitable when it’s time to go for their walk outside. They can be a little stubborn sometimes and protective of their territory and family. I have seen David face some pretty interesting circumstances where his sense of humour and calm, gentle manner have helped to maintain a student’s dignity.

David’s contribution to the students at MHS has been nothing short of amazing. He made such a huge difference. The kids have been asking for him all year. In a school where young boys, in particular, need kind and gentle role models, David exudes that at all times.