The Northwest Territories has published its plan to absorb a series of “revenue shocks” which left the territory missing more than $80 million.

Finance minister Robert C McLeod unveiled the NWT’s 2018-19 budget on Thursday. There are no significant cuts and some modest expenditure on new programs and services, focused on health and wellbeing.

The budget shows revenues in 2017-18 were $46 million down on initial estimates; expenditures were almost $40 million more than anticipated; and the effects of declining income will be felt into the future.

As a result, the territory has abandoned its pledge to return to a cash surplus by 2019 – and will face a combined debt of more than $1 billion by next year.

“Revenue shocks beyond our control have meant we are not where we wanted to be by this time in our fiscal plan,” McLeod told the legislature in his budget speech. “We must accept we are still adding to the debt future residents will have to pay.”

Where did the revenues go?

Corporate income tax is the biggest factor in the missing money. The territory received 25 percent less corporate tax than expected in 2017-18, amounting to a $22 million drop, and that is expected to fall by another full $30 million in 2018-19.

The territory says much of this relates to a major corporation exercising a legal mechanism to write off some tax obligations. The finance minister would not name the corporation in question.

The territory also budgeted for $113 million in personal income tax in 2017-18, but received only $82 million. It overspent on contract work by some $20 million in the same period, with public-private partnerships such as the new Stanton Territorial Hospital appearing to cost $6 million more than planned (up from $82 million to $88 million).

In the legislature, McLeod applauded his government for a “remarkable job of managing expenditure growth” through two prior years of cuts, aimed at reducing costs by $100 million.

Those cuts, initially designed to help return the GNWT to a cash surplus, are now being used to cushion the blow of unexpectedly low revenues and free up money for new initiatives. McLeod said the budget demonstrated a government “supporting residents where it is needed most.”

New funding for programs and services announced in the budget includes:

Overall, the budget projects an operating surplus of $23 million, which is the lowest in seven years. After adjustments and capital costs, that figure drops to just $2 million.

Total debt is expected to hit $1.052 billion in March 2019, leaving the territory with $248 million available to borrow under its agreed $1.3 billion federal borrowing limit.

Debt-related payments each year include $9 million to pay back Deh Cho Bridge costs, $11 million per year on the Stanton hospital from 2019-20, and $7 million per year for the Mackenzie Valley Fibre Line.

In the medium-term future, McLeod says his government expects “modest revenue increases” in contrast to recent years of decline.

However, significantly increasing the NWT’s revenues will be tough. Royalties from mining, oil, and gas were forecast to hit $43 million in 2017-18; instead, they came in at $31 million and are now estimated to reach just $13 million in 2018-19. That’s despite the territory producing and shipping more diamonds last year than ever before, by the GNWT’s own estimates. 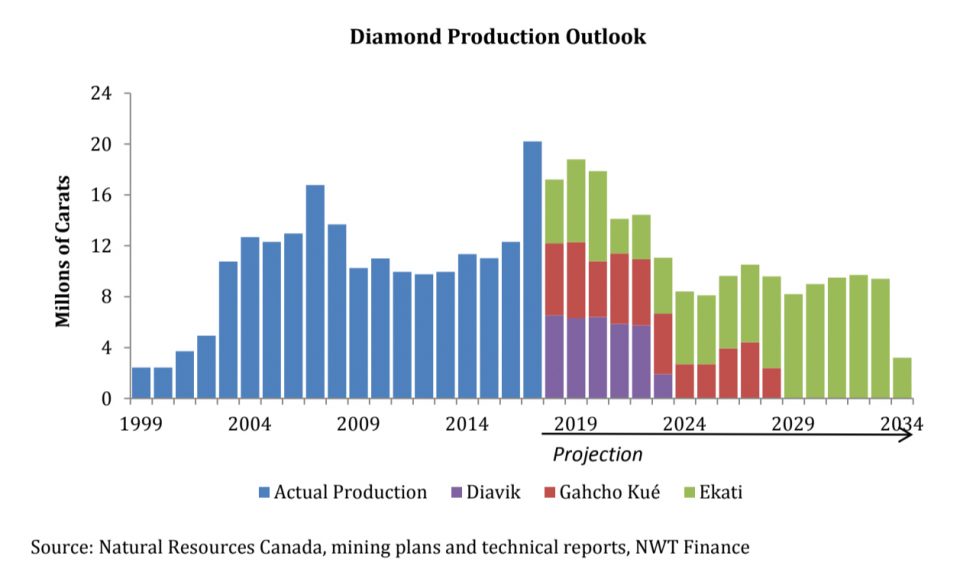 In reality, even mining royalties are a small slice of the pie compared to the federal payments which make up almost 80 percent of the territory’s income each year. In total, Ottawa will send $1.53 billion to Yellowknife in 2018-19, with a forecast $308 million coming in from other sources.

Only population growth – which means more money from the federal government, per resident – will have a significant impact on that federal figure.

In exploring other potential revenue sources, McLeod’s budget proposes a new Land Transfer Tax (paid when buying land, or an interest in land) which is expected to generate $3.1 million in annual income. There are no other significant tax changes.

The territory should also begin to receive 75 percent of federal cannabis tax revenue collected in the NWT, once legal cannabis sales begin.