A photographer dedicated to the creation of giant Canadian emblems from tens of thousands of portraits is back in Yellowknife for a fourth time.

Since embarking on his nationwide project in 2008, Tim van Horn has visited the city three times – most recently in 2014. He was due to arrive for a fourth stint early this week.

So far, Van Horn claims his work features more than 60,000 photos taken in 1,300 communities across the country.

“It’s the largest portrait ever created in Canadian history,” he says. “It’s important to continue to update what we look like and have something that’s current for the public to sink their teeth into. Something that’s authentic, something that people see themselves reflected in.” 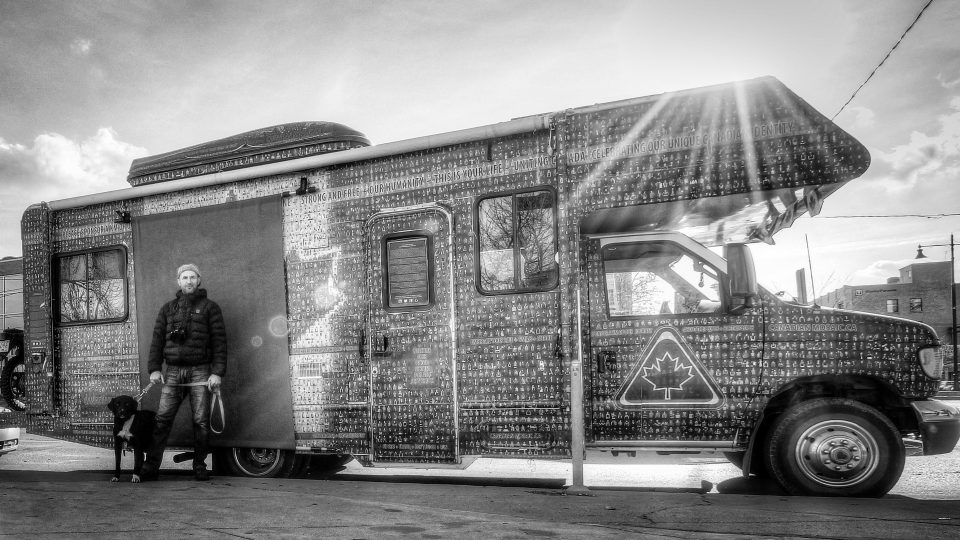 Van Horn, who travels the country in a 25-foot RV, spoke to Cabin Radio ahead of the road trip north from Alberta. He plans to spend two months in Yellowknife, parking the RV on lake ice then moving around the city from day to day, photographing passers-by.

“Each photograph acts as a nuance,” he says. “I’m trying to create the complete matrix, where every little life moment, every cultural combination possible, is represented.

“Upon completion, I can say ‘this is what life is all about.’ I don’t care who you are, I’m open to everyone.”

The trip will involve unveiling an updated ‘mosaic’ for Yellowknife, featuring 2,018 northern faces. The back of Van Horn’s RV also features an eight-by-eight panel showcasing his past portraits taken in the city.