Cabin Radio’s 10 most northern news stories of the year

Some news stories have the hallmark of being from the NWT before you even check the location.

Below, we’ve outlined our top 10 and named a few close runners-up.

Happy reading, and we hope you enjoyed our news coverage this year.

Food trucks get far more media attention in Yellowknife than they do just about anywhere else in the world.

That’s particularly the case when one shows up in Kam Lake in the middle of January.

Noodo Monster introduced itself to Yellowknifers in the dead of winter, immediately earning respect for the owners’ determination to serve ramen to hardy residents prepared to venture out in the cold.

And now for the bad news: Noodo Monster is set to close next month. The owners are stepping away for family reasons, though they offered to sell the whole operation, including the recipes, to interested parties. 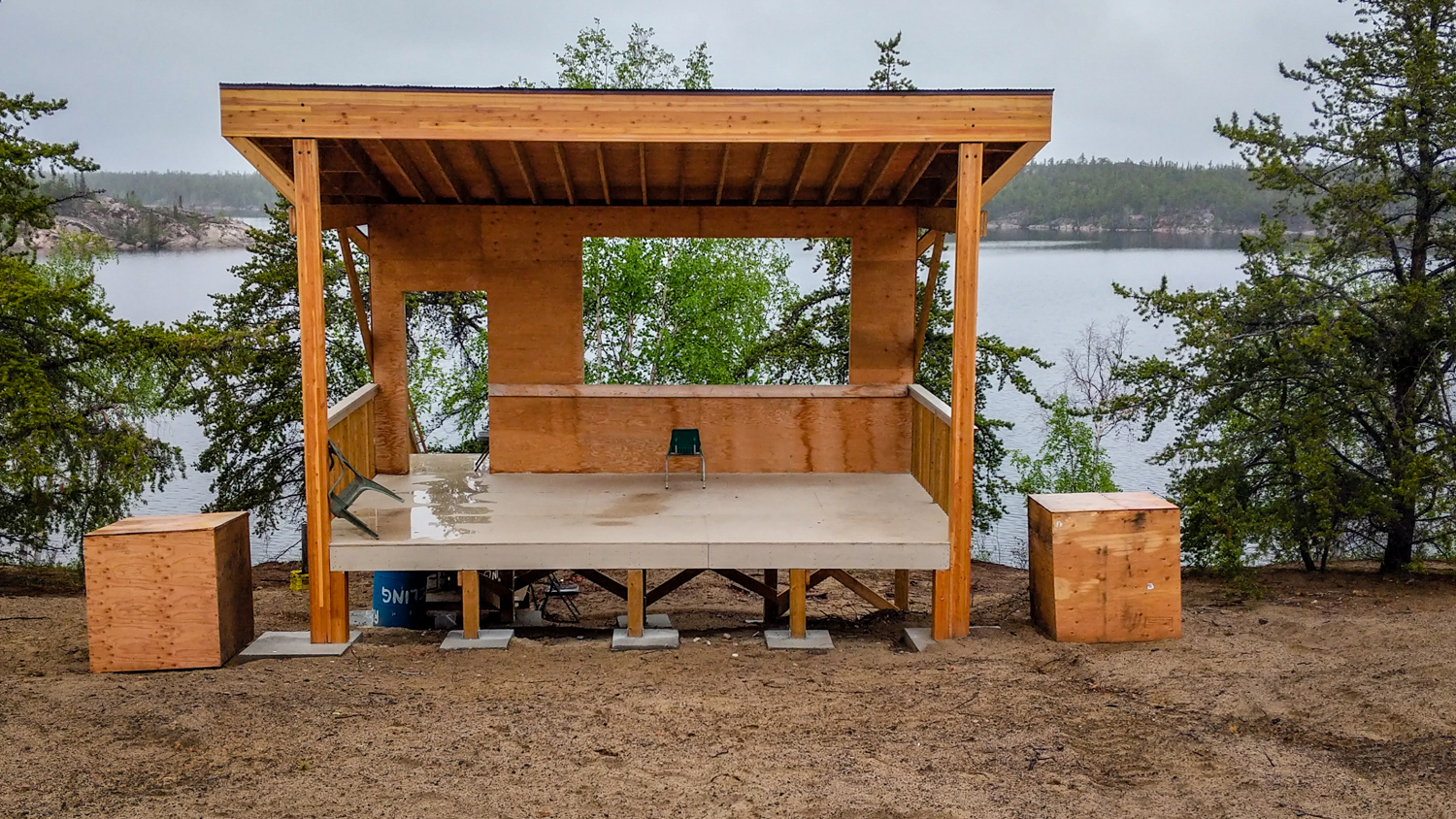 A soggy Cabin Stage at the Folk on the Rocks site in June 2018. Ollie Williams/Cabin Radio

In case you didn’t notice, Yellowknife endured one of its wettest summers on record – with the Solstice Slam party a casualty.

When the event was cancelled over concerns about waterlogged equipment, it wasn’t hard to envisage who the real victims would be: the millions of mosquitoes waiting for an evening feast.

Anecdotal evidence from campers suggested this mosquito season was among the worst in memory.

It would appear they recovered quickly from this disappointment, whereas the city went on to post record rainfall figures for June.

On to number eight…

The kind of headline which might lead to an independent inquiry anywhere else in Canada, but is a part of community life in the North.

Inmates at Fort Smith’s jail put together a fun “haunted castle” outside the complex each Halloween, then serve hot dogs to kids who come trick-or-treating.

This has been happening annually for more than a decade.

In the past, we reported, RCMP and bylaw officers have had to step in as trick-or-treaters created so much traffic trying to get to the castle.

First, let’s be clear: the Games in Hay River and Fort Smith were a great success, delivered by amazing volunteers.

However, in the middle of the night following the closing ceremony – just when it was looking like the whole thing would be finished without a major incident – a bus carrying athletes from Greenland fell off the highway on the way to Yellowknife Airport.

Passengers had to hop to safety from an emergency escape window. Thankfully, there were no reports of any serious injuries from the incident.

Very rarely are major events held in parts of the world where eight-hour airport transfers make it possible for athlete transport buses to glide into snowdrifts in the middle of nowhere.

To the surprise of nobody, this is the first of two appearances by Tim Hortons in this top 10 – in a story guaranteed to start journalists reaching for punny phrases.

A man from Fort Good Hope was arrested after police suggested cocaine had been found amid Timbits being flown into the community from Yellowknife.

The North’s reliance on flight for travel to communities make inspection of your Timmy’s goods – and stories like these – far more likely than anywhere down south.

One person contacted Cabin Radio to ask where we had acquired the cocaine to stage this photograph. Firstly, this is an RCMP photo of the actual packages and Timbits – we are nowhere near dedicated enough to go out and recreate something like this – and secondly, even if we did, do you think we’d go and get actual cocaine to put in the baggies? Icing sugar seems a slightly safer bet… (“Northern journalists arrested after file photo coke deal” would definitely also be in this list.)

This was one of the most controversial things we reported on in 2018: Long John Jamboree organizers allowing residents to take sledgehammers to a set of ice carvings after the festival had finished.

The Jamboree said the ice carvings are an insurance risk if left in place, unattended, once the rest of the festival site is dismantled – adding this allowed residents to have some fun while selling tickets for a small fee as a fundraiser.

Others felt the exercise was unnecessarily brutal and questioned whether amateurs with sledgehammers were much of an improvement, as insurance risks go.

Emotions ran high in the Facebook comments. An American claiming to be an ice sculptor (though they had not attended that year’s Jamboree) left Cabin Radio a one-star-out-of-five Facebook review purely for reporting on what happened…

The tension is rising. On to number four…

Only in Yellowknife could a report about how it’s not very nice outside become one of our most-read stories of the year.

On the morning of May 8, Ollie got to the Cabin Radio newsroom at around 5am in what was, by any measure, disgustingly cold and snowy weather – long after we should have been rid of those conditions.

As payback toward Mother Nature, we wrote a brief, deeply snide report which stated: “Yellowknife residents looking outside have unanimously agreed to abandon Tuesday, May 8.”

This late, stunning entry into the top 10 only took place in the past week – and has all the ingredients for a truly northern tale.

Northern politics is a fascinating beast, at every level from the boards of tiny non-profits to the territorial government.

Exactly why the Salt River First Nation’s council voted to bar its own chief from the gas bar and Tim Hortons franchise it owns is still not fully clear, but the council chose a remarkable means of publicizing the move: a poster on the door of the gas station.

The chief is apparently not the first to receive a ban from the Tim’s in Fort Smith. Several Facebook commenters noted with glee that this development may mean their own bans are lifted – although we aren’t sure how that interpretation of the rules works, exactly…

If we were running a News Photo of the Year contest for the NWT, this might be in with a chance of winning: Sarah Carr-Locke’s capture of Yellowknife resident Amanda Kanbari portaging her canoe downtown.

As locals will know, Kanbari is a fair few blocks from any water in the image. After this was posted, we quickly tracked her down for an interview.

“I am definitely an urban portager, for sure,” said Kanbari. “Women – portage your canoes, you can do it! It’s not that hard.”

Cabin Radio is (genuinely) looking to holding a portage race along the downtown streets during 2019’s Festival on Franklin. Get in training now.

And finally, in at number one…

If this is your car on the Dettah Ice Road, you should probably move it

Where to start. Firstly, there aren’t many places in the world where you run the risk of the road melting before you return to your vehicle.

In mid-April, the owner of this Buick got in trouble for appearing to abandon the car in the middle of the Dettah Ice Road.

A ticket attached to the windshield warned the owner they had only a few days to retrieve the car – somehow it being an old Buick just makes this story even better – or else it would be impounded.

The Buick was gone by the start of the next week, although it’s not clear whether it was claimed or hauled away. And of course, there’s always the broader question: what the hell happens to make you abandon your vehicle in the middle of an ice road and not come back for days?

These stories didn’t quite make our top 10, but maybe you think we’re wrong:

In the boreal forest, rumours of a Christmas tree shortage – of course, here in the land of 10 billion trees, we can’t find any of the right tree

Mystery of car beached on Yellowknife rockface – how do you even get that car to land there?

Fugitive turtle has been on the ‘run’ for a week – woman assumes the NWT has turtles (it doesn’t), fails to pick up a rogue one, chase ensues

Broken limbs, a medevac: what it took to get that kayak video – the risks behind a crazy stunt filmed at Alexandra Falls

These guys want to put a floating sauna on Great Slave Lake – did this ever actually happen? We feel like nobody invited us if so

Thank you to all of our reporters this year: Ollie Williams, Sarah Pruys, Alice Twa, James O’Connor, Dylan Short, and everyone who took the time to speak to us and contribute to our articles.

Thanks, especially, to everyone who messages us with tips and photos when something is happening or there’s something we should investigate. We get dozens and dozens of messages – they really help us stay on top of the latest news, so we can get information to you quickly and accurately. Send a tip or a photo any time to news@cabinradio.ca or message our Facebook page. Your anonymity is guaranteed if you request it.

And of course, thank you for reading, too! You can help power independent northern news by visiting our Patreon page and signing up for as little as $1 per month. It all goes directly to our part-time journalists – every story you read here is written by someone not paid full-time to do this. They are a dedicated team and every little extra helps.

We’ll be running a skeleton service until the new year, bringing you only important breaking stories, but we’re looking forward to being back in 2019 for what is bound to be another packed year of unique, northern news.